Man Accused Of Double Slaying In Bar Goes On Trial 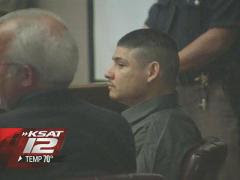 The only employee who survived a fatal shooting and robbery at a nightclub near downtown testified Friday in a capital murder trial.

Denise Koger identified Joseph Gamboa in court as the man who fatally wounded Ram Ayala, the owner of Taco Land, and Dennis Morgan, a bartender.

Koger testified that after Gamboa shot Ayala and Morgan, he turned the gun on her.

Koger told jurors that despite giving the defendant money, he still shot her.

Koger survived the shooting, but Ayala died at the scene and Morgan died 19 days later in the hospital.

Gamboa was later arrested in jail, where he was being held on charges of pulling a similar robbery two days after the bar killings.
Posted by HMK at 10:02 AM No comments: