The Patron Saint Of Taco Land 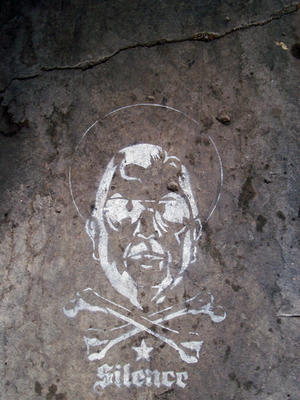 Photo By: Brian Parrish
Posted by HMK at 9:09 PM No comments: 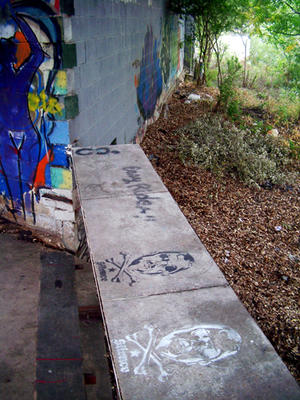 A Poem For 'Gypsy' Doug Morgan

Doug was big... wide...
Arms like legs.
Before he came to San Antonio
he worked in a bathtub factory.
He would lift the tubs
from the rack
and load them in the kiln.
When the porcelain was fired
he'd lift them again.
Arms like legs...

He was not that tall
but he was big.
And he had a big heart.
His voice was soft...
His manner was disarming.

He lived for a while
in a shack with a basement
dug by a quarry worker
near Alamo Stadium.

In the 1980s,
he sold mushrooms
to too many people.

In the 1990s,
he almost chopped off his finger
working as a butcher
on St. Mary's Street.
He was that strong.

Did I tell you
he was strong-willed?
He laid down the bottle
when it interfered
with what he wanted to do.

Near perfect, I should say...

Ram went down with Taco Land.

Doug, bless his big heart,
held on to life for weeks.

The bullets that would
kill a lesser man right away
gave Doug a slow death.

Ram was a cantankerous character...
ornery owner of Taco Land.
We all loved him.

But Doug was a brother...
I'll miss him forever. 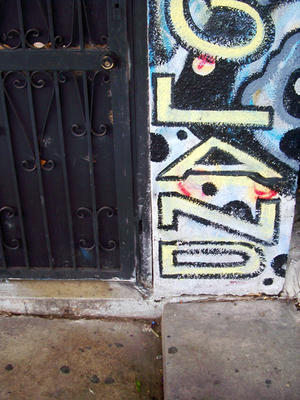 Photo By Brian Parrish
Posted by HMK at 5:03 PM No comments:

Place: Tacoland
When: One Night in 2003
Who's Playing: Pillow Of Wrongness
Ram Factor: One-Chinaman Limit

My band was touring through Texas in 2003, and we played a show at Taco Land. As far as I could tell this was the cool place in town to play, despite the lack of a website or answering machine. I did successfully reach someone at the bar on the phone, and booked a monday night at 11:00 P.M., which I was told was when people started coming in there. I called back about 3 weeks later to reconfirm the show, and this crochety-sounding guy with a heavy mexican accent answers the phone. I explain to him that we're a band from L.A. and we booked a show there. He looks at the calendar and says we're not on it. I say we booked it through this woman at the bar, whose name I forget, and he says "she don't work here no more." At this point I'm thinking of saying "thank you" and hanging up, but he says no to worry we could play there. but they don't have a P.A. system. So I look for San Antonio bands online and write to find out if anyone has a P.A. and wants to play with us that night, and sure enough we hook it up.

When we get to SA the first thing we do is spin by the place to check it out. It looked comlpetely abandoned, like it had been closed for 5 years. We were a bit nervous at this point, but decided to go to our hotel, settle in and come back later. Our bassist, Albert, was Korean, and let's just say him and Texas didn't seem to get along that well.

This was our last show of the tour, and he said that he'd just sit in the car until show time, which was 2 hours from then. We told him he was being ridiculous, that there was nothing to worry about, no one was looking at him funny, etc. The rest of us go in, and from first glance were in love. and then we met Ram. probably took 2 or 3 glances to fall in love with him, but here's how it happened. We went up to the bar and ordered 3 Budweisers. He say "Ok, that's a dollar each." Being from LA we were already in heaven. As we're handing over the money, he pulls out 3 Lone Stars from behind the bar, and says "But if you want these, they're free for band members. "We all stare at each other, look back and say "Three Lone Stars!!" This starts the beginning of a very drunken evening.

We go out to the car and get our bassist and tell him to come in cuz everything's fine. He steps foot in the door, and we tell Ram that he's in the band too, so he can get free beer. The first words out of Ram's mouth were "We have a One-Chinaman limit here." Well, I guess he should have stayed in the car after all. It was a priceless moment. In fact there was another woman of Asian descent in the bar, and despite Ram's quip, and several other Asian-related points of humor he exounded upon that night that I won't share.

Ram was making out with aforementioned Asian lady an hour later. We didn't take stage until 12:30 at night on a Monday, and for whatever reason there was water all over the floor by the stage, and it looked like it could easily hit the power strips and amps, so our guitarist grabs a mop and starts soaking it up. It's to date the only gig that we've had to mop the stage before playing due to danger of electrocution. but, again, priceless.

Ram called us pussies a dozen times, gave us stickers saying "Is it too loud for you PUSSY??" and at the end of the night, he took us back by the bar, pulled out a six-pack of Lone Star and says "here, take this for the road. "It would be impossible to forget the one night we spent at Taco Land, and I always figured I'd get back there soon... I guess not. But at least we were there.
Posted by HMK at 7:41 AM 1 comment: 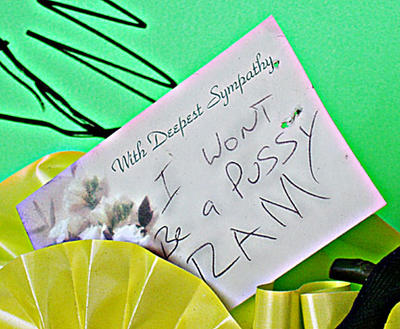 photo by Dr. SuaveTone
Posted by HMK at 7:10 AM No comments:

There will be a memorial service held in memory of Taco Land owner,
Ramiro "Ram" Ayala, on Sunday, August 14th, 2005 starting at 8:30 pm. It
will take place at the historic Josephine Theatre, which is located at 339
W. Josephine Street (at the corner of W. Josephine & N. St. Mary's).

There will be live music by The Infidels, The Rhythm Kings, Los Mescaleros and others, as well as remembrances by many of Ram's friends, family & members of the San Antonio & Austin music community. The event is free & open to the public. All of Ram's friends & fans are invited to attend.

The South Texas Blood & Tissue Center will also be on-hand throughout the evening for a very special Blood Drive. This Memorial Blood Drive will begin at 6:00 pm in front of the Josephine Theatre, and will continue inside the lobby when the doors open at 8:30 pm. The hope is that this drive will generate as many as 100 units of blood for the center, which is currently operating on only a one-day supply. This event will also act as a "blood replacement drive", benefiting our friends Denise "Sunshine" Koger and the late Douglas "Gypsy Doug" Morgan. If there are any outstanding medical expenses for either (or both), the South Texas Blood & Tissue Center will direct a donation for every unit collected that night toward those hospital bills.

In addition to helping to boost the South Texas blood supply at this
critical time, donors will receive a commemorative Memorial
T-Shirt while the supply lasts. This shirt will not be sold or reproduced,
so donors are encouraged to arrive early.

We look forward to seeing everyone at the Josephine Theatre on this Sunday, August 14th for this memorial service & celebration of a truly wonderful man's life.

Please help us to spread the word of this event, by forwarding this
to as many friends & fellow members of the music community as
possible.

Thank you
Jerry Clayworth
Posted by HMK at 6:48 AM No comments:

Today at 2 p.m. Aug 3 there will be a graveside service for Doug 'Gypsy" Morgan.
This is open to all family and friends of Doug, at San Jose Burial
Park (out on Mission Rd on the south side).

God Speed Doug. Say hey to Ram from all of us.
Posted by HMK at 9:15 AM No comments:

To The Friends of Doug Morgan

Just a quick note to friends of Doug Morgan. From the family a big
hug and thank you so much for making what could have been a very hard
time, into an up lifting occasion. Barbara and George Hecox (Dougs
parents) both expressed what a joy it was to get to meet you all and
how it lifted their hearts to realize that their son Doug was so well
loved.

Doug will remain in San Antonio where his extended family is, He
will be at the San Jose Burial Patk. A grave side service will be
held sometime in the first part of August when Barbara and George get
back down here. It will be open to you each.

I want to express my thanks to you all for being there for Doug
and hope you will continue in community to support Denise (Sunshine)
and the families of Doug and Ram. A memorial service is scheduled for
Ram in August on Sunday the 14th with the place to be announced soon.

PLEASE send this message to anyone you thank should receive it as my
e-mail list is a little short of all the addresses.